HONG KONG, CHINA – Media OutReach  – 8 November 2018 – GFX, the Hong Kong based customer loyalty platform, has announced the next step in its evolution. 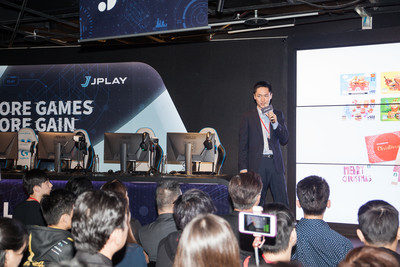 In addition to its powerful customer loyalty network driven by blockchain technology, the company has embarked on the second stage of its vision, that of investing in projects that will add synergy to its proposed eco-system set to integrate multiple industries.

Moving forward, GFX will focus half their operations on their loyalty program and half on implementing their investment vision.

GFX held a short presentation at the event in which they introduced their investment plans for the project.

The eSports market and user base is set for explosive growth in the near future, and blockchain technology is poised to take full advantage of gifting and merchandising opportunities. JPlay’s young and energetic team is deeply embedded in gaming and youth culture and understands the industry at grassroots level, a significant key success factor to enter this market.

Other GFX Investment Projects Launching in 2019
GFX also intends to build an investment portfolio that adds value to their eco-system.  Blockchain technology is slowly starting to disrupt a number of traditional industries such as banking, finance, retail and insurance, and GFX aims to be a part of the process.  The company will target promising projects in industries set for big growth, such as medical tourism, medical blockchain and the energy sector, to name a few.

GFX Loyalty Network
The GFX rewards network is a cross-loyalty platform that connects multiple retailer reward schemes into one central network, where points are compatible and without an expiration date.

The benefits are huge for both customer and merchant:  customers get a simple, better and more rewarding loyalty network, while merchants gets a much higher return on investment as well as big data on their clients.

GFX Community Groups & Free Gifts
The GFX Network officially launched and to celebrate this milestone, they are for a limited time running community campaigns with great prizes on the official GFX WeChat and Telegram channels.